You have seen the meme’s floating around telling you to love the Virginia Opossums because they eat ticks. They do and it is most certainly an endearing quality, but it  is not the only thing that makes Opossums so cool.

Opossums have the most teeth of any North American mammal giving them their characteristic smile.  These teeth help these omnivorous scavengers devour road kill and other cadavers bone and all. This bone crunching ability helps them meet their very high nutritional requirement for calcium.

Opossums have a prehensile tail. They use this tail as an aid while climbing. Contrary to popular believe they don’t sleep hanging upside down from their tail and being picked up by their tail is painful.

Opossums have opposable thumbs on all 4 feet. Again and adaptation to help them climb.

Opossums are North America’s only marsupial. This means they carry their offspring in a pouch on their belly like a kangaroo.

20-30 very tiny babies are born after only a 13 day gestation. They crawl their way to the pouch and locate a nipple which they swallow. They stay in the pouch for about two months after which they start leaving the pouch intermittently and often simply ride on the mothers back. They wean after 3 months.

It is important to check on recently killed opossums you see on the road during the summer months. Often if the female gets killed the babies in the pouch who are cushioned by her body survive. If you find any babies who are still alive please contact your local wildlife custodian, SPCA, Humane Society or Animal Control for help.

Although both male and female have a pouch (much like men have nipples) it isn’t difficult to figure out the gender. The testicles of a male opossums have a blue colour to them and are hard to miss. 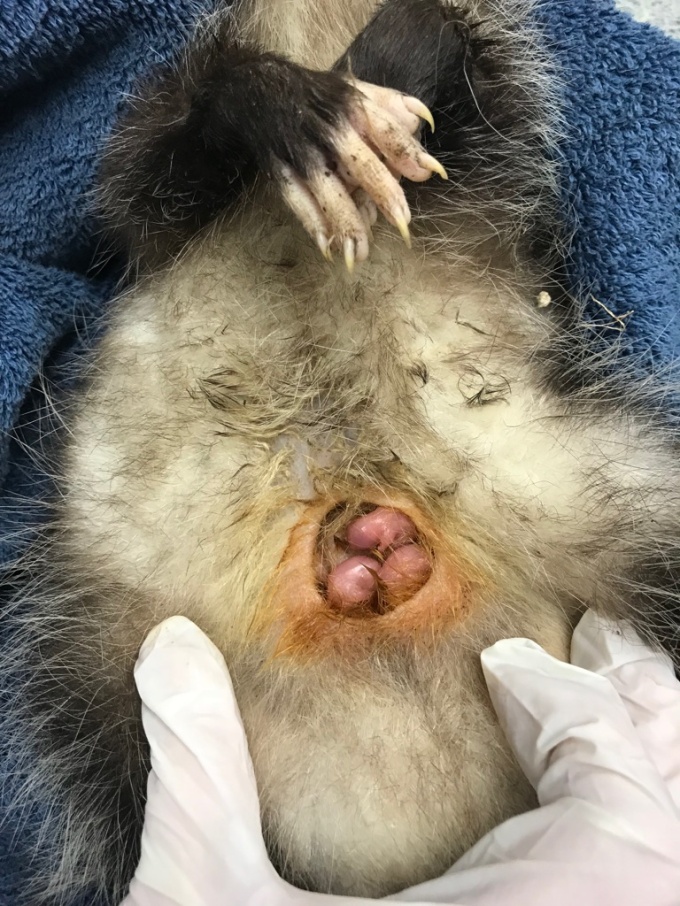 Opossums enjoy dining on snakes and as a result evolution gave them an immunity to a large variety of snake venoms. We don’t have many venomous snakes around Ontario, but opossums are a fairly recent arrival in our province and brought their venom immunity with them from the Southern US.

Despite their recent arrival they are not an invasive species as many believe them to be. They arrived here on their own accord and are not a human introduced species. This makes them now a natural part of the mammals living in our province.

Opossums have a significantly lower body temperature than most other mammals. This is what makes them less likely to contract rabies. They simply aren’t warm enough for the virus to survive.

It is however not impossible for opossums to get rabies as there have been a couple of recorded cases.

The average lifespan of an opossums is 4 years. This isn’t very long and certainly much less than most people expect.

This is an involuntary physical response to danger which they share with fainting goats. If they think their life is in danger an opossum with go stiff and roll on their side. Their body bloats and starts giving off a putrid smell resembling being dead very closely. After some time passes they eventually will regain consciousness.

Despite the toothy grin they display biting or attacking is not the preferred defence, playing dead is.

Opossums are the definitive host for the EPM protozoa and if an infected opossum’s feces end up in horse feed can cause an unvaccinated horse to contract EPM. It is therefor best to keep opossums away from horse barns.

As more recent arrivals in our great province the Virginia Opossums has yet to evolve into being able to withstand our frosty cold winters. They create dens in which they sleep during the day and they are predominantly active during the night.

However when it is well below zero their naked feet, ear and tail easily freeze, so they often chose to stay in their den to prevent frostbite.

If the cold spell goes on for an extended period of time they have the option of freezing to death or starving to death.

Every year we admit a lot of opossums with frostbite. I hope evolution catches up soon and gives them nice furry feet, tails and ears. 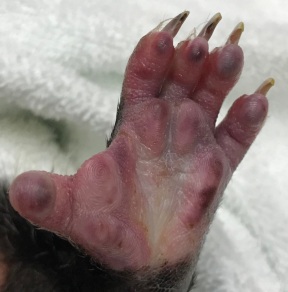